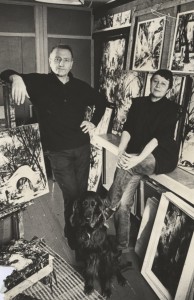 In 1973, during vacation in Palanga, when Romualdas was bored, his wife Aušra brought him an easel, set up a composition with an apple and told him to draw. The work “Liudvikas and an Apple” that he created on that occasion marked the beginning of a fifteen-year period of painting. Hundreds of paintings, more than a thousand drawings and a multitude of sketches have reached our days. Many of his paintings are double-sided, and quite many drawings were made on drawing sheets of “Orgtechstatyba” company.

At the beginning of his creative career Šilinskas learned from the outstanding artists who impressed him the most: Salvador Dali, Marc Chagall, Amedeo Modigliani and Joan Miró. He would collect the reproductions of his favourite paintings in a large album, which was a source of inspiration for him. He dedicated much attention to the studies of Renaissance and primitive art, explored naïve art and took interest in the famous works by Henri Rousseau, Niko Pirosmani, Slovakian primitivists and children’s work. He was particularly fond of the latter, and often invited his young relatives or friends’ children to draw together and learned from them.

In the early 1980’s, the theme of the city became distinct in Šilinskas’s painting. Vilnius became his favourite subject – he drew the city from nature, from newspaper photographs and postcards. While looking at his paintings and drawings, one can roam the streets of Vilnius Old Town and admire the churches, panoramas of Old Town roofs, and explore his improvisations on the theme of the city. The artist constantly returned to the images and details of Saint Anne’s Church, the Cathedral, the Gediminas Castle Tower and the Gate of Dawn. One of the first stages, in which the artist’s individual style is revealed, can be called the “white” period. A white background is predominant in the paintings, the drawing is made with agile lines, the city’s architectural elements are conveyed quite precisely, and the objects are easily recognisable. Other elements used in his cityscapes – people, trees and cars – are abstract and more expressive.

As years went by, less and less details remained in his cityscapes, and those that did remain were stylised. His works from the “pink” or “pastel” period, created from 1986 to 1988, belong to a separate group. They are characterised by laconic drawing, simplified elements and soft colours. The latest works are rather abstract fragments of Vilnius with prevailing dark local colours and seemingly light-handed but very intense strokes. In his last drawings the artist immersed himself in free interpretations of the city and revealed his individual style that he had been elaborating during all these years.

By the efforts of his wife Aušra Šilinskienė, two exhibitions of his works were held in 1998: at the Museum of Architecture and the Utena Museum of Regional Ethnography.

Since December 2014 to February 2015 an exhibition “Unfamiliar Familiar Architect”, dedicated to the 80th anniversary of birth of Romualdas Šilinskas, was held at the National Museum of Lithuania.