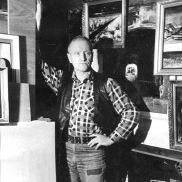 Romualdas was born and spent his childhood in Utena. That is where he studied and graduated from a local gymnasium. In 1955, Romualdas joined the faculty of architecture in the Vilnius Art Academy. 5 years later, in 1961, after finishing his education, Romualdas started working in “Komprojektas” in Vilnus, which is where he designed interior’s for various buildings.

The most productive time for Romualdas as an architect was from 1967 to 1983, when he and his wife Aušra worked in the Resort Design Institute. At the time they designed many big recreational objects: “Gintaras” health resort, the club and cafeteria for “Neringa” health resort, “Vilnius” Sanatorium, the housing for “Pušynas” sanatorium and one of the biggest projects – a 200 bath hydropathic establishment in Druskininkai. The latter is an impressive building that brought the authors fame and recognition.

As for the painting side of Romualdas’ works, the deciding year was 1973 when he was vacationing in Palanga. “Liudvikas and The Apple” was the name of a now deteriorated beyond recognition piece, which broke the 20 years of holding down Romualdas’ passion for painting. Afterwards all of his spare time went to painting, of which the architect did not have a lot. Yet now, whilst looking at his works, one can realize that painting was not only a hobby, but more of a passion, a race against time.